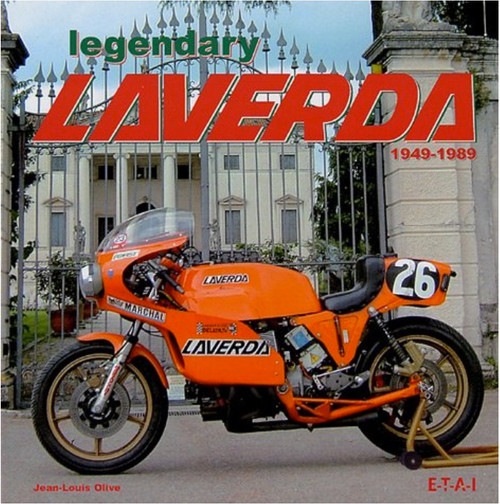 After searching the world for this pubication we pleaded with the publishers to check the boxes in their basement and have secured their last remaining copies of this extraordinary book.

Laverda is considered a legendary marque thanks to spectacular creations like the 750 SFC - champion of the 1970's endurance races, the 1000 V6 - the first racing motorcycle equipped with such an engine, and the 1000 Triple - the most powerful and fastest motorbike in the world at the time.
More than two years of work and research in Italy, other European countries, the USA and Australia, was completed to restore the historical truth of the marque through its most legendary models like the 75, 100, 750, 1000, 1000 V6 and 500cc. Each chapter contains the history and specification of each model followed by a focus on a specific and famous bike.

This book is approved and supported by the Laverda family who have written the foreword and also provided many documents and photographs, hitherto generally unknown by the public and specialists alike.
The final chapter includes a practical guide for purchasers and collector's needs, particularly with purchase recommendations, contact addresses, specialised websites
This book presents a fine sense of detail on historical, technical and anecdotal basis, and a reference for the very famous models of the Fifties and Sixties which are very rarely recognised.

Collaborators in this work with information and pictures are notably the famous rider and journalist Alan Cathcart (winner of the Daytona Battle of the Twins on a Laverda 500), the champion George Fougeray (factory team rider in the endurance races), the businessman Jack McCormack (importer for the USA) , the engineer Franz Laimböck (who conceived the 1200 SC and "nonframe" superbikes) and naturally, the founding family of Piero Laverda and his son Giovanni.
Painstaking work in cross-checking and confirming information with the assistance of Stephen Battisson, and successive validation by the Laverda family made it possible to give such structure to the book that it can be used today as an absolute reference for both amateurs and collectors alike.
A major asset of this book is the exclusive presentation of a study, including 3D drawings, carried out by a significant international company on a future Laverda engine derived from the famous 3 cylinder engine.